Well, the forum is concluded, and sorry I didn’t keep the blog daily, but heck, I’ve never had such a densely packed week of meetings, conversations, more meetings and partying! God forgive me, but I had to catch up on some sleep and figure out a way home since my eurolines open return botched up on me. (don’t rely on an open return in peak season!!), but I made it back thanks to a lift from the Via Campesina Belgian film crew who took me to Brussels!

I was incredibly inspired by everyone’s energy and enthusiasm to get the absolute max out of our time together…..to the point that after Saturday night’s final party evening, the PIIGS countries (Portugal, Ireland, Italy, Greece and Spain) in crisis called an 8.30am meeting on Sunday morn, over breakfast to see how we could create more solidarity in our particularly nasty recession positions we find ourselves in.  With 4 hours sleep on me, I made that meeting! But I digress…, let’s go back a bit…

Second discussion day in subtopics, I lost concentration a bit. It was hard with all the translations.  We reported back to our main thematic groups and then to our constituency groups. (mine was consumers/urban movements).   Its a bit complicated, so hopefully ill get to draw a lil chart and stick it in next week and you’ll get how the structure of it worked.  Some action ideas were materializing and good overlaps were happening even between thematic topics.  For example, in my ecological production group, trade policies and alternative distribution methods were identified as key challenges which overlapped with two other thematic groups of the same names.  Encouraging ecological production is not a clear case of convincing farmers that these methods work….it’s about diminishing the stack of active policies against this mode of production as well as ensuring access to a market, as well as other challenges.

That night, a fab Balkan DJ Tom took us on a whirlpool dance bonanza till 3am in the morn. I was wrecked but happy.

Friday was the relax day, with around 15 trips organised to different eco-places around Krems, like workers co-ops, alternative farms and some general history tours thrown in too.  Myself and Sian went on the trip to Arche Noah, one of the best seed banks in the world they told us.  We saw amazing varieties of everything; purple and black tomatoes, loads of different types of blackberries which I savoured slowly, mad purple and white carrots.  It was such a good feeling to just walk around this place.  This is where I want to be if the shit hits the fan! Our guide told us that sometimes when older people who visit and find a ‘lost’ variety lets say of apples, which they hadn’t eaten since they were young, and then they taste it again after so long, they get quite emotional as is brings back a flood of memories.  I got the feeling that this place held a lot of magic.  We need more seed banks. Visit and support Irish seedsavers!!

Our guide also told us that 80% of their customers are gardeners, and  only 20% are farmers growing strange/local varities. It’s incredible that EU law already is prohibiting sale of unregistered seed varieties….for now seed swapping is possible but for how long? If I’m not wrong, there’s a law in the pipeline to seriously restrict this too. 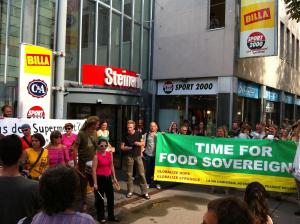 Friday afternoon saw a colourful musical march happen…..the direct action folk who were all engaged in the thematic discussions organized a small demo with SAMBA -ATTAC band through Krems city centre, stopping at some chainstore supermarkets and handing out fliers.  The march ended at the “Market of Ideas” which was set up in a square in the town with lots of local produce, and interactive activities for the public to engage with, as well as some great live music.  There was even a stall of locally skipped food for anyone to take for free which some dumpster divers had collected to emphasise the food waste that goes on in our supposed civilized countries! 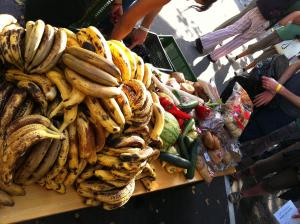 I showed The Pipe flick that night on the Anti-Shell campaign in Mayo Ireland and had a small discussion afterwards. Folks were pretty interested in it, and some people took copies to show in Germany, Turkey and Austria.

On Saturday morning we had the first reading of the final declaration….and we were all able to give feedback at the general plenary for final changes.  The organisation committee had been pulling all-nighters trying to assemble the essence of the 20 different subgroups which had been discussing issues, ideas and actions over the last 2 days, to try to come out with a declaration which would be acceptable to all.  I didn’t envy them the task! I have to confess though….I slept it out for this. After a week of late nights and early starts, I had to get one lie in, so I turned up at lunchtime, but got filled in by the rest of the Irish delegation.

The afternoon saw people meeting up to discuss the declaration and make final suggestions to the writing committee.  Again the translators/interpretors astounded me, as the text was translated into at le3ast 10 different languges before the day was out.

I attended a Friends of the Earth meeting where we were able to input into the declaration…most of us wanted it more strongly worded, with more explicit references to climate change being both a impact on food production worldwide, as well as food sovereignty being part of the solution to climate change.  When the final declaration was read that evening, there was great appalause from the crowd paragraph by paragraph nearly. People were well satisfied.

That evening, some Belgian folks organised a direct action sharing workshop where 4 folks got up to present….first up was a Belgian guy against GMOs (forgotten his name!) pulling crops up in Belgium which has one of the highest number of GMO trials in Europe at present, which meant that the scientific community mostly called them luddites for their actions. Then I talked about Climate Camp Ireland , the  Rossport Solidarity Camp, and general activist personal sustainability skills. Amoury from the Belgian Artivist collective gave us the lowdown on their YESMEN stunts around Belgium in the EU Commission, many on food sovereignty issues. And finally Morgan from France talked about Reclaim the Fields (see previous blog for more details),  There was interesting discussion then on the effectiveness and importance of direct action and its role in wider campaigns and the pre and post work needed.  The question of what is non-violent direct action also came up, to which I urged everyone to keep debating it in their groups, read more on it, and keep evolving their ideas on it, because my experience over the years is that I cannot judge someone’s actions without knowing the context and other relevant info.  It’s a difficult but important debate.

Many folks there were well interested in trying to organise an European-wide direct action gathering….to discuss theory, strategies and tactics, and take a little action.  It’s another one for the pipeline. I think it would be brilliant.  I’m on a mailing list now. We’ll see what happens.

The forum came to an end with quite a bit of madness in the form of a mystica, where 8 countries while we all stood in a circle, and the chairs were laid out as spokes of that circle in double rows facing inwards, where we later were asked to converse to someone across from us about how the event went in total.  Twas a bit chaotic trying to organise the couple of hundred folks there, some which were hungover, or not even gone to bed.  But we did a great bit of cheering at the end and did big thank-yous to the organizers, amazing kitchen collective crew, facilitators and interpreters.

I really saw what it takes to pull off an event like this…..I was well impressed as were most people. I know now that it’s possible to have a very participative event.  The forum did cost over 200,000 euro though, with almost 100 volunteers giving their free time to translate, facilitate and cook….so it’s no small task, that’s for sure. But when people come together…..we can be the change we want to see in the world!

Now back to Ireland, and spreading the good fair food buzz there…..